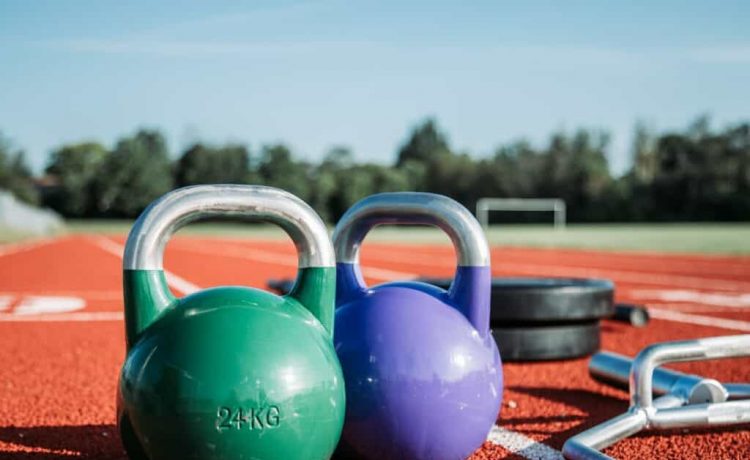 You may be new to exercise, or you may have been going to the gym five times a week for years. Either way exercises with kettlebells, or kettlebells, will be beneficial for you. Although many dumbbell and kettlebell movements may look similar, kettlebells work a little differently because each exercise involves multiple muscle groups that keep you stable and fit. All kettlebell workouts strengthen muscles but don’t make them bulky, increasing your heart rate to the same levels as cardio workouts. Experts say it’s a combination of cardio and strength training that works the entire body.

Kettlebells, originally called GYRIAS (which translates as “weight”), found their origin around 1700, in the former Soviet Union (although the first gyria was found in Greece in 143 BC), where they were used as a measure of weight among merchants, who used them in their scales in the markets. Later, they would show who could lift more weight and demonstrate their Strength, making contests circuses another attraction.

During the 19th century, the Soviet army used them as part of their physical preparation and training programs. During the 20th century, bodybuilders such as Eugen Sandow showed off their Strength by lifting all kinds of weights, including gyrias, touring other countries, and spreading the word about their practice.

After World War II (1939-1945), kettlebell lifting became popular in Russia and other countries, and people became interested in Olympic lifting, competitions, and becoming Masters of Sport.

In 1974 girevoy sport (that’s its name in Russian) was declared the official ethnic sport of Russia. In 1981, a government commission was created to make a compulsory training program for the general population to maintain wellness and lower health expenses.

It was not until 1985 that criteria were unified with the kettlebell sport committee’s creation, and the basis for competitions, rules, and regulations was established. They were introduced in America in 2000, and from that moment, their regular practice began to spread rapidly. However, once again, the fitness industry was responsible for distorting the technique to sell more. Nothing has to do with the actual sport of gyrias with what is currently seen in gyms, where it is used as another weight without taking advantage of the shape and anatomy of a kettlebell.

The kettlebell is a cast iron or steel ball with a flat base and a top handle. The kettlebell exercises are used to perform continuous and dynamic movements, multi-joint, through which we work strength-endurance, flexibility, balance, aerobic endurance, agility, stability.

Strengthening of the lumbo-abdominal girdle and improvement of posture. Scientific studies, show that kettlebells’ correct practice improves the back’s functionality and health, reducing the ailments in many cases as it is strengthened.

It is recommended to look for a good kettlebell exercise professional to avoid injuries in the lower back and hips. It is a double-edged sword, so as always, make sure you are in good hands!

Tracy Deniel
Share on FacebookShare on TwitterShare on PinterestShare on VKontakte
Tracy DenielMarch 26, 2021

Connect with a Reliable Dentist in Thornhill

The quality of the HCG you purchase determines its effectiveness

How to Prepare for Refractive Lens Surgery